What is Conjunto? | Rancho Alegre
Skip to main content

Nearly everyone has heard of Flaco Jimenez, because of his work with the Texas Tornados, The Mavericks, and even the Rolling Stones. But Flaco is just part of a rich musical tradition unique to Texas, following in the footsteps of his father, Don Santiago Jimenez and brother, Santiago Jimenez, Jr. For those unfamiliar, here’s a very quick description of Conjunto music. There’s so much more, this is just to give you an idea. 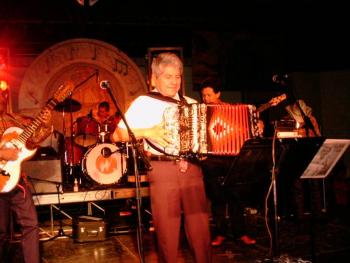 Conjunto music is Texas “roots” music that dates back to the end of the 19th century. Like Blues and Traditional Country, it tells the stories of the everyday lives of the working class. It is also dance music, characterized by a strong, unrelenting beat and bright accordion melodies, evidence of the fusion of German and Mexican immigrant cultures in south Texas at the beginning of the 20th century. It was tremendously popular among working-class Mexican-American Texans during the post-World War II era, before audiences began to flock to Tejano music, which was a heavily influenced by Orquesta, Rock, Rhythm and Blues, Jazz, and Country, beginning in the late 1960s and 1970s, nearly wiping out Conjunto on radio playlists everywhere by the 1990s.

In recent years, Conjunto has enjoyed a surge in popularity, thanks to the internet, the rise of younger groups, and new festivals in cities all over Texas and the rest of the country. It remains, however, a hidden gem in the history of American music and continues to fight for air time on the few remaining terrestrial Tejano music radio stations in Texas.

Want to know more? Listen to our Conjunto playlist, which features classics from legendary performers like Rene Joslin, Tony De La Rosa, Ruben Naranjo, Los Cuatitos Cantu, and more. You’ll also hear hits from some of today’s up and coming Conjuntos who are keeping the tradition alive and going strong.

Also, don’t miss the story of this music, told by the musicians themselves, in their own words. Be sure to listen to our exclusive interviews with the pioneers and the new generation.

EVEN BETTER: Go see a show. A great place to start is at the Rancho Alegre Conjunto Festival if it's coming up, or any of our other events.

Spread the Word about Rancho Alegre

Tweets by @ratexas
Scroll to the top